During the lockdown, I found it comforting to work with poetic forms. I worked on sestinas, sonnets, a deranged Oulipian form which is has a spiral of repetition like the sestina, but has EIGHT keywords rather than the sestina’s six. It took months to write one, and I first had to learn to write a sestina before I could deal with eights. On the flipside: what a joy to complete. I know it sounds corny, but these forms bring me the joy of a job done well.

So, as I was playing around with forms, I may have branched into something new. There is an existing form called the Fibonacci poem. At the end of this post I’ll show you my process from start to finish, and if you want to try some, I’ll include a copy of the drafting form I created to make my super-restricted version of these, if it interests you.

In a 2006 article in The New York Times, Fibonacci poems are described as a “simple, yet restricted form”:

“The number of syllables in each line must equal the sum of the syllables in the two previous lines. So, start with 0 and 1, add them together to get your next number, which is also 1, 2 comes next, then add 2 and 1 to get 3, and so on.”

The Gustavus Adolphus College mathematics department had a contest for Fibonacci poetry in 2008, and suggested contestants stop their sequence at 13.

“…a Fibonacci poem, which means that the number of syllables in each line should follow the Fibonacci sequence: 1, 1, 2, 3, 5, 8, 13. (Each line after the first two contains as many syllables as the two lines before it put together.) In theory, a poem could continue beyond the 13-syllable line, but this is not recommended.”

There is a current journal, The Fib Review, which has dedicated itself to the form since 2006. Their editors define the form as such:

“The Fibonacci poem is a poetry form based on the structure of the Fibonacci number sequence. For those unfamiliar with the Fibonacci Sequence, it is a mathematical sequence in which every figure is the sum of the two preceding it. Thus, you begin with 1 and the sequence follows as such: 1+1=2; then in turn 1+2=3; then 2+3=5; then 3+5=8 and so on. The poetry sequence therefore consists of lines of 1, 1, 2, 3, 5, 8, and so on with each number representing the number of syllables or words that a writer places in each line of the poem. As a literary device, it is used as a formatted pattern in which one can offer meaning in any organized way, providing the number sequence remains the constancy of the form.

The subject of the Fibonacci poem has no restriction, but the difference between a good fib and a great fib is the poetic element that speaks to the reader. No longer just a fun form to write as a math student, the poets who write Fibonacci poems have replaced the ‘geek’ with the poet.

The Fibonacci forms I’ve seen make excellent use of syllables and words in their counts, but I love micro forms, and love forms, and had only just been introduced to the world of Oulipian constraint (thanks to The Penguin Book of Oulipo edited by Philip Terry which published at the end of 2019.). 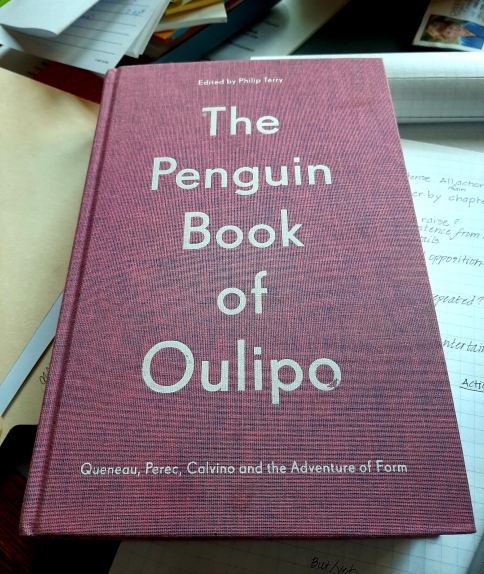 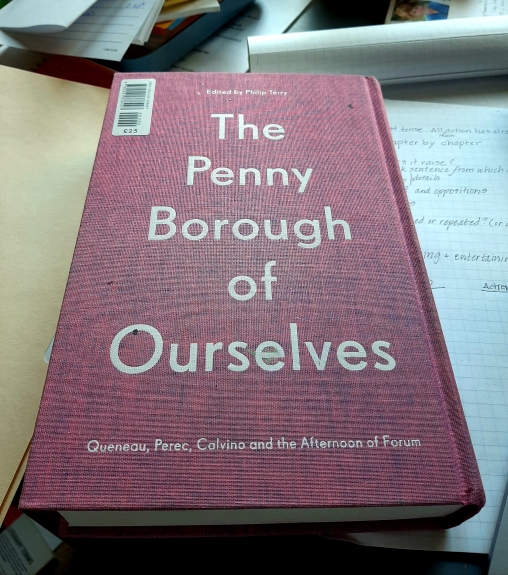 I wanted to count characters. Then I wanted to deal with spaces. A complete constraint. The syntactical desert of the one and two-counts seemed at first claustrophobic, one can only do so much with the code-breaking involved in one- and two-letter words. But we live in the age of texting, emojis, and characters. What are they if not compressions of words and ideas that are widely understood?

So, while I first began with counting words, then syllables, then characters. I realized I could compress more, and employ symbols along with letters, and added the challenge of counting spaces, too.

I made myself a form to print out and use that turned it into a meditative game.

Here is what the first draft of “Mary-Pat” looked like: 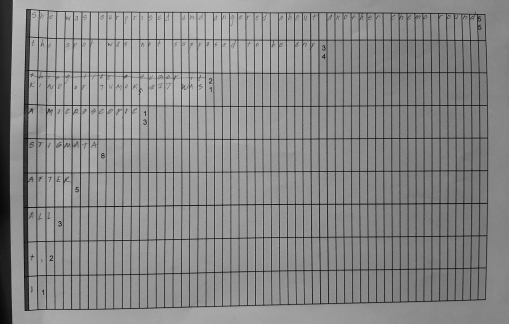 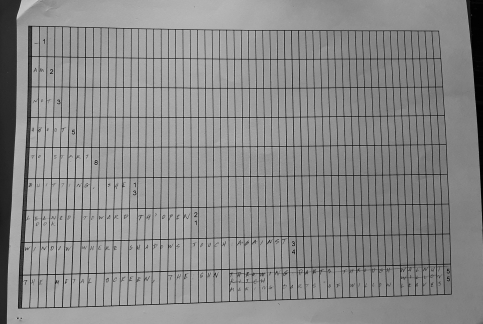 I made the spaces on the form extra tall so I could play with substitutions and replacements without starting over and over.

3. Once I figured out the draft, I printed it out in a nice blocky courier font, which really squares up the spacing nicely. Seeing it in a more compact space also helps initiate the next phase of edits.

4.  Next step, workshop it with my writing crew, nobody knows what to do with it but we all agree we like them. Put it in TNR font and send it out.

I sent “Mary-Pat” to nine poetry markets. It was declined by two before being accepted by Editor Grandinetti of The Fib Review. I then withdrew it from the other six. In terms of record-keeping, I’m a little OCD. I not only mark up a printed master copy with where I send things, but also keep an excel spreadsheet. I tried logging things on Duotrope but found it to be too much (although I do use Duotrope for research.)

5. Interestingly, a lot of editing happened with this exceptionally short piece (55-word) piece. Here is my proof with corrections:

6. Editor Grandinetti was involved and attentive, and made a small change that made a big difference.

7. This poem is concerned with my lovely, lovely friend Mary-Pat whom I miss very much. She died of pancreatic cancer a summer ago. I loved her. Here is a picture of the two of us, with MP on the left:

You can find the published version of “Mary-Pat” via the link below. The Fib Review also selected and published a second microstructure. (I am so grateful.)

“île Saint-Louis” begins with the mathematical symbol for therefore,  ∴  .  I especially like it in this context because it looks like a little rubble pile, and implies inevitability (which is so on-point, thematically.)

Anyway, I hope you’ve enjoyed this little essay. I love that picture of Mary-Pat and me. She was so good. She was a good listener, with an all-out laugh I can still hear.

I continue to obsess over and write these microstructures, and have published seven so far.

If you’d like to give them a try, here is a blank form you can play around with. Definitely recommend that you print it out and work on it by hand. Use the force, Luke.  And have fun. — Anne

A. E. Weisgerber is a teacher, editor, and hybrid writer from Orange, New Jersey. Awarded first place for features from the Society of Professional Journalists, she is a Reynolds Journalism Fellow, a 2018 Chesapeake Writer, and 2017’s Frost Place Scholar. Recent items in 3:AM, DIAGRAM, The Alaska Star, Yemassee, SmokeLong Quarterly, and Gravel Mag. Her flash fiction appears in many international anthologies. She is an Associate Series Editor for Wigleaf’s Top 50, and is currently writing her first novel about a terrible family that finally gets something right. @aeweisgerber anneweisgerber.com
Rejection Letters
Books and Mor

Not another journal. Just a legitimate love child (blog) brought to you by Al Kratz, A.E. Weisgerber, April Bradley, Francine Witte, Leonora Desar, Lucien Desar, Pat Foran, Patricia Q. Bidar, and Paul Beckman. A studio for our work and a place to showcase an occasional Guest Monster we are lucky to get to work with!!!