“Picnic” is special for a couple of reasons.  First off, it’s the lead story in one of the nicest, most intelligent, and fun-loving independent literary fiction journals out there: Flapperhouse #13.  Editor Joe O’Brien has such a catchy enthusiasm, and the magazine and its companion readings at Pacific Standard in Brooklyn are the stuff of local legend.

The second reason “Picnic” is cool is because it’s one of the stories that hides inside the Zoetrope Cafe Story Vending Machine, on the North Shore in San Francisco.  I had submitted it to Zoetrope All-Story Editor Michael Ray, and he replied: “I appreciate your portrait of the panoply of characters that comprise a family and the complicated feelings they inspire. And while the story is rather brief for our pages, might you be willing to allow us to add it to the story machine in Francis’s cafe in San Francisco?” to which I replied, OF COURSE!

If you ever go there and decide on a 5-minute story and mine prints out, I’d love to get a copy of it in that format. 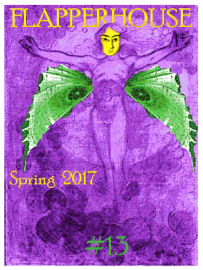 As far as Flapperhouse goes, I am a subscriber to the magazine and it is a rocking read.  It seems to me that the editors publish things that are dark yet dear, smart and smarting, so I sent five stories — everything from a centaur who considers drastic surgery to a sentient shopping mall that’s been destroyed by committees, and “Picnic,” too. Joe said he liked them all, but it just so happened that Issue 13 was coming together with a strong theme of film and murder, and “Picnic” kind of hit that intersection just when Flapperhouse was looking for a final spot to fill. I never felt so lucky!

If you are in Brooklyn on Wednesday 3/22, I will be reading, and here is the lineup:

Thank you for visiting.  I hope you enjoy “Picnic.”

Header photograph is a detail of a painting in Supernature, an exhibit of works by the artist Jeff Muhs, taken at Lyons Wier Gallery, 542 W 24th St, NYC 2/21/2017

A. E. Weisgerber is a teacher, editor, and hybrid writer from Orange, New Jersey. Awarded first place for features from the Society of Professional Journalists, she is a Reynolds Journalism Fellow, a 2018 Chesapeake Writer, and 2017’s Frost Place Scholar. Recent items in 3:AM, DIAGRAM, The Alaska Star, Yemassee, SmokeLong Quarterly, and Gravel Mag. Her flash fiction appears in many international anthologies. She is an Associate Series Editor for Wigleaf’s Top 50, and is currently writing her first novel about a terrible family that finally gets something right. @aeweisgerber anneweisgerber.com
(mac)ro(mic)