It’s been a while since I wrote a long-form essay (July 2014?!!) so it was great to go down that storytelling avenue again. Many thanks to editor Ander Monson and the committee at March SHREDNESS for inviting me to write about Mötley Crüe’s song, “Too Young to Fall in Love.” You can jump over to the essay here.

Every March, I read and vote my way through this fabulous musical tournament, and love the writing associated with it.  I think my favorite essay during March FADNESS was Joe Wenderoth’s essay on Sir Mix-a-Lot’s “Baby Got Back.”  During March SADNESS? So hard to choose from so many powerful essays. Check out Katie Jean Shinkle’s work.

So, while this essay is pre-tournament, meaning the 1983 Mötley Crüe song I represent is not one of two Crüe contenders selected for the big dance (the Committee sensibly opted for power ballad “Home Sweet Home” and certified-platinum sleaze, “Dr. Feelgood”), this essay provides a chance to think about Crüe in the years before 80s hard rock peaked (1987-90). Proud to be part of the SHREDNESS pre-game show.

I like doing interviews, something I did all the time as a journalist, so this was a great excuse to call my old friend, heavy metal guru Eddie Trunk.  I also began formulating ideas for an essay about the band by messaging my favorite longtime imaginary Internet friend Jayne at Enigma Arcana, and one of my oldest buddies of all, Anthony Vitale who owns The Original Music School. 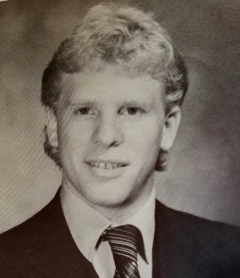 1982 Photo Break (L-R): My friends Anthony, me, and Eddie. Bonus picture: who is my famous classmate on right?

I also happen to be related to a hard rock cover- and originals-band drummer, Glen Weisgerber aka Taz Marazz, who loves Crüe, too. It all gets mixed in.

Research for this essay was an education and pleasure.  I read Nikki Sixx’s Heroin Diaries, most of Tommy Lee’s Tommyland, and lots of the band’s tell-all, The Dirt.  BY THE WAY — I bet if you try to find these titles in your local library THEY’VE BEEN STOLEN.

I watched VHI documentaries, interview clips, and even one of the band’s earliest and awful live performances at the US Festival.  This is a band that never pretended to be anything but rock stars. They lived the dream, in all its ugly glory.  I looked through newspaper archives, fan sites, and band pages.  Thanks to Paul Miles for letting me quote his material on the filming of the TYTFIL video.

I think the essay says it all in terms of why I think Mötley Crüe is odds on to win this “hair metal” tournament: tl;dr? They define the genre.

I hope you enjoy the essay, the videos, and interviews. Let me know what you think of Mötley Crüe in the comments.  I hope it comes through that I have a lot of respect for the band’s dedication to its act and artistry.  I hope I did them right. Thanks for dropping by.

A. E. Weisgerber is a teacher, editor, and hybrid writer from Orange, New Jersey. Awarded first place for features from the Society of Professional Journalists, she is a Reynolds Journalism Fellow, a 2018 Chesapeake Writer, and 2017’s Frost Place Scholar. Recent items in 3:AM, DIAGRAM, The Alaska Star, Yemassee, SmokeLong Quarterly, and Gravel Mag. Her flash fiction appears in many international anthologies. She is an Associate Series Editor for Wigleaf’s Top 50, and is currently writing her first novel about a terrible family that finally gets something right. @aeweisgerber anneweisgerber.com
Flash Monsters!!!

Not another journal. Just a legitimate love child (blog) brought to you by Al Kratz, A.E. Weisgerber, April Bradley, Francine Witte, Leonora Desar, Lucien Desar, Pat Foran, Patricia Q. Bidar, and Paul Beckman. A studio for our work and a place to showcase an occasional Guest Monster we are lucky to get to work with!!!

We pick apart the world and publish its viscera.